It’s a dream come true to be amongst a team of dreamers and doers that devote such great care and effort to make the most beautify efficient machines on the planet.

I learned to ride a bike on my own. As you may imagine it was a rough start, but soon I was rolling around the suburbs of Portland Maine and began exploring farther and farther away from my home base. The sound of wind past my ears and the first feelings of my self-inflicted inertia let my imagination put me in the cockpit of a deft spaceship.

In 1996 I founded SCUL, a sci-fi fueled bicycle gang that makes spaceships out of discarded bicycles. I make cute robots from re-purposed metal under the name Skunkadelia. I try to pass on what I’ve learned by teaching TIG classes at the Artisan’s Asylum.

But before all that I was working with Rob, Matt, Skip, Tim, Jennifer, and Mike at Merlin Metalworks in Cambridge, and after a few years, here at Seven. Seven supersedes and feeds all the other aforementioned things I do. Seven taught me to make things, to weld, to explore and nurture crazy ideas.

Why I work With Seven

It’s in the blood.

My Role at Seven

I was a machinist when I first started working at Seven. Since then, I’ve taken on many roles, including final machining and finishing, welding, shipping, inspection, and repairs. I’ve been the in-house graphic designer since 2006.

Frequently Asked Questions about my job at Seven

What exactly do you do here, anyway?

Much of my day involves many things that fit under a big umbrella, including photography, print design, web coding, clothing and softgoods design. However I’m game for just about anything thrown at me. 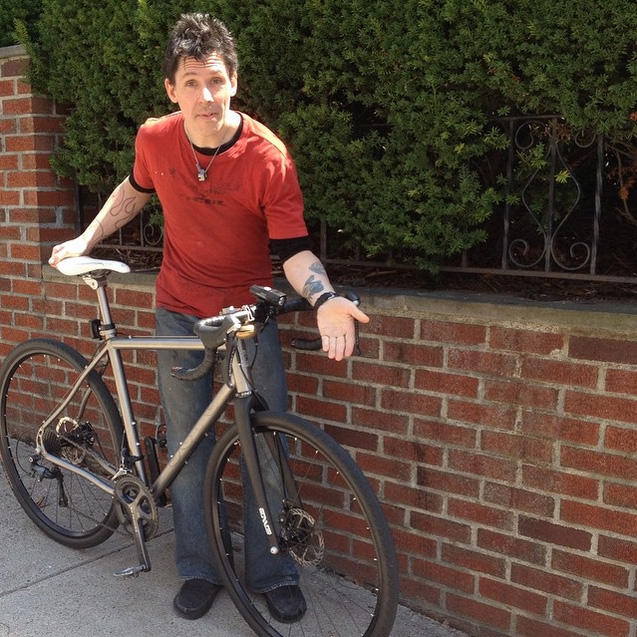 For years I commuted almost exclusively on a heavyweight cruiser, but after a crime-fighting shoulder injury, the rough Bostonian roads were too harsh: I’d sometimes have to grab my messenger bag mid-air as it catapulted out of the Wald giant delivery basket as I bounced out of puddle-camouflaged potholes on narrow shoulders. I had considered building myself a beefy mountain frame with racks galore, however Rob coaxed me into test riding a Mudhoney SL to see if I could finesse over some of the terrain. I was sceptical but once I tried it I was hooked.

Redshift was the first Seven I built from start to finish: once my frame drawing was done and the tubeset was selected, I took the frame through machining, welding, final machining and finishing. I created some special graphics to blast on the frame as well. Since I’ve been out of production since 2006, it was a special treat to take a week off to come to work amongst my fellow Seveneers. There’s nothing quite like getting my hands dirty making the best possible bike for me from the ground up.

While I’ve been riding for twenty years on all kinds of bikes in and near Boston, I’ve never felt like there was nothing left to change about my bike. Every once and a while I tweak a derailleur cable, or top off the tires, but most of the time the thing’s just ready to go: and every time I do go I am reminded of what levels of perfection, precision, and exhilarating speed and grace can be achieved with an expert rendition of a the world‘s most efficient machine.

I named the bike ‘Redshift’ after the phenomenon that happens when light or other electromagnetic radiation from an object is increased in wavelength, or shifted to the red end of the spectrum, which is used in Astronomy to measure the speed and direction of a star moving away from Earth.

And on the opposite end of the efficiency spectrum is USB Cloudbuster, a 170-pound tallbike equipped with sonic disruption, lights, and rotating, glass disco mirror ball known as ‘the Discobobulator’. It’s the flagship of SCUL, and it has completed may missions, including short multiday tours and a few centuries. It’s very slow up hill, but very fast downhill. 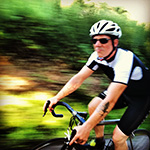 Every time I take it out, I am amazed just how responsive and agile a bike can be. It feels like every pedal stroke is amplified and transformed into unadulterated speed. It feels like a formula one.

The only stainless Seven ever made. Complete with S&S couplers. Unfortunately, stainless in inherently low in fatigue strength, so it’s no longer around. It was a dream come true while I had it. 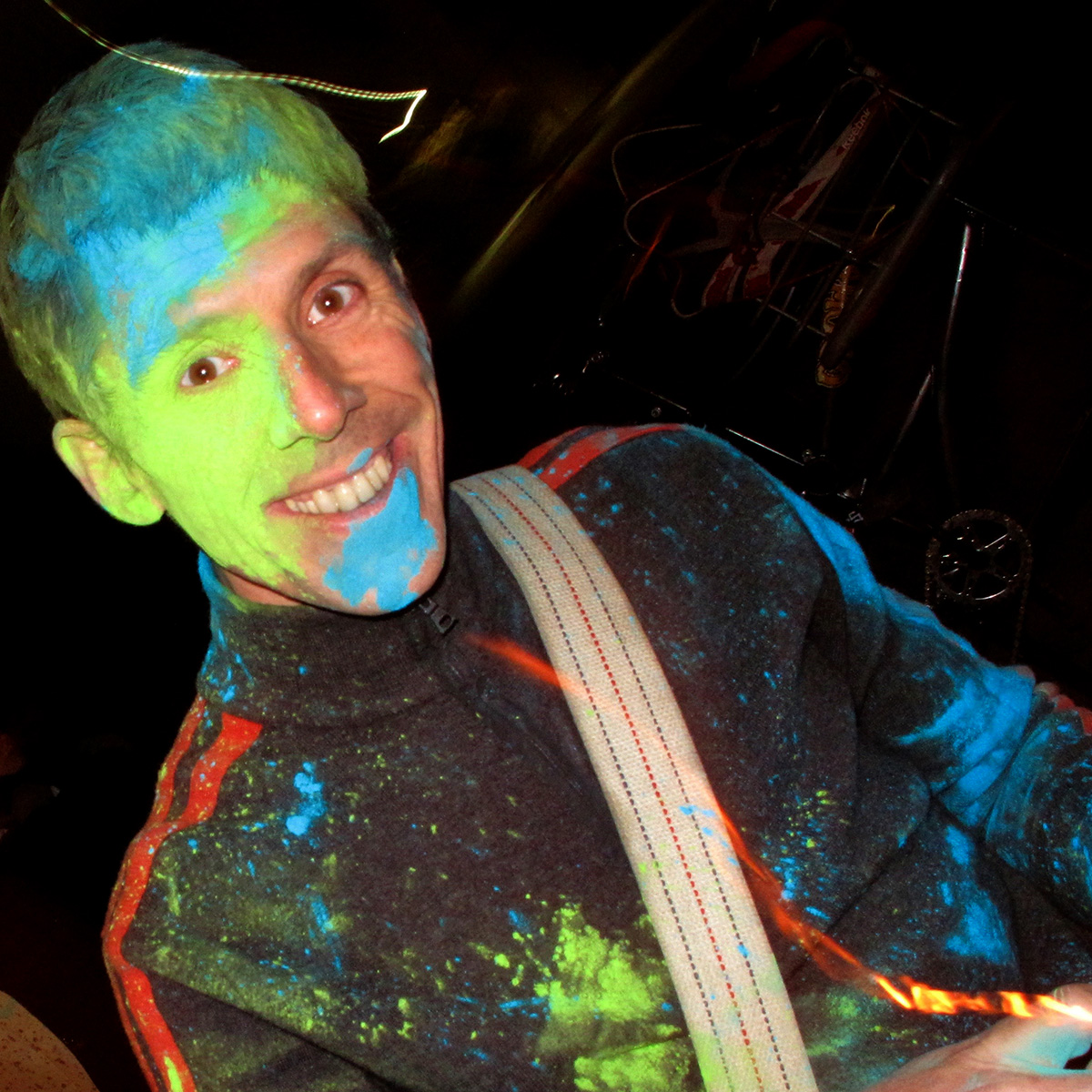 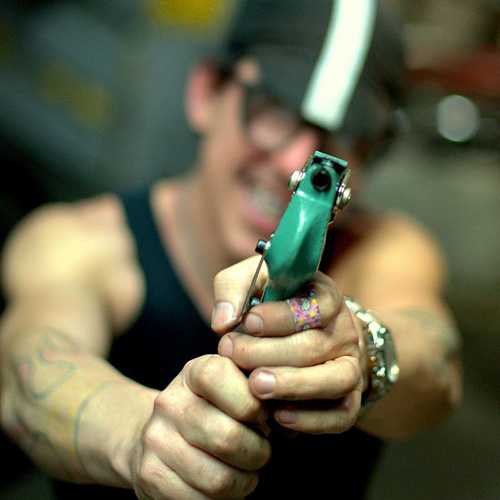 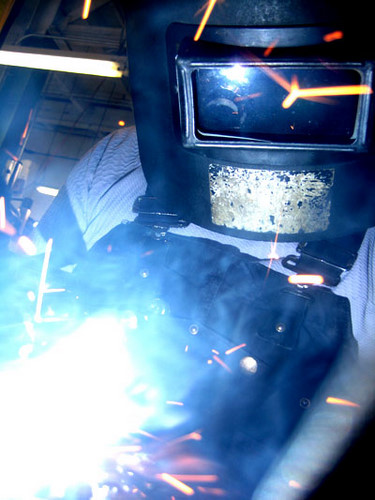 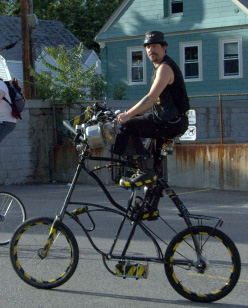 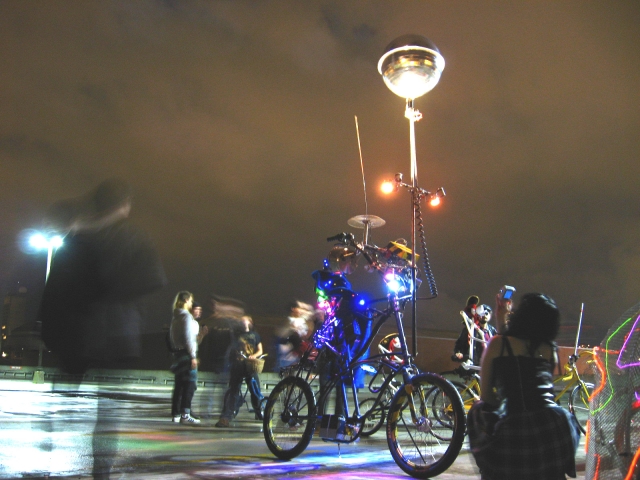