Now available… while they last! 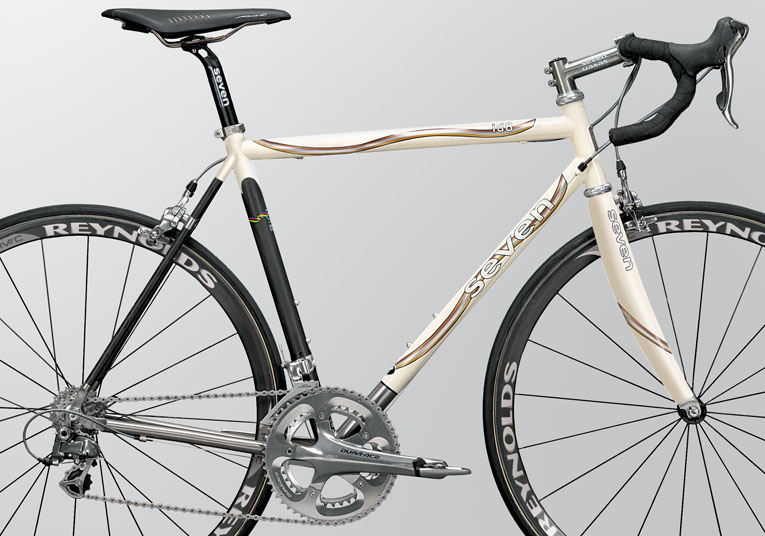 Seven’s 10th Anniversary ID8 road and Sola mountain bike models are now available, and we’ve just begun crafting the first ones for those excited riders who “just had to have a low serial number”.

As two of the most influential bikes of the last decade, these very special editions are sure to go fast. So call us today to learn more or visit your local Seven retailer to place your order.

As one of the most influential bikes of the last decade, we couldn't think of a more fitting road model than the ID8 to help us celebrate our tenth anniversary.

In 1997, a young Seven Cycles anxiously unveiled its new bike line at the Interbike tradeshow. Seven's wide array of models was impressive enough: road bikes, 'cross bikes, hardtails, softtails, full suspension, and tandems—in titanium and steel. But one stood out even among a roster of superstars. A road bike then known as the Odonata.

Upon seeing it, Bicycling magazine nominated the Ti/carbon beauty for their Editor’s Choice award. The frame design was so talked about, even Mountain Bike magazine reviewed it, writing “Not even with their abundance of engineers, slick ad campaigns, or lawyers have the biggest of the mega-bike corporations reached such a level. Eat your heart out—the folks at Seven have you beat.”

The Odonata sparked a design revolution, and other companies soon began combining carbon and metal tubes in similar ways. Velonews would write, “What do you do when you have a design so innovative even the Italians copy you?”

Over the decade, the Odonata has seen change, including its name—which is now the ID8. But its essence remains. The ID8’s velvety smooth ride is just as incredible today as ever. In the words of one magazine “It is a contemporary bike for the modern traditionalist.”

First introduced in 1997 as the Sun, the Sola was not only Seven's first mountain bike model, but it was among the very first bikes we ever built. In fact, five of the first ten frames we produced as a company were Solas. What's more, every one of them is still ridden today, even after a decade of hardcore riding and racing.